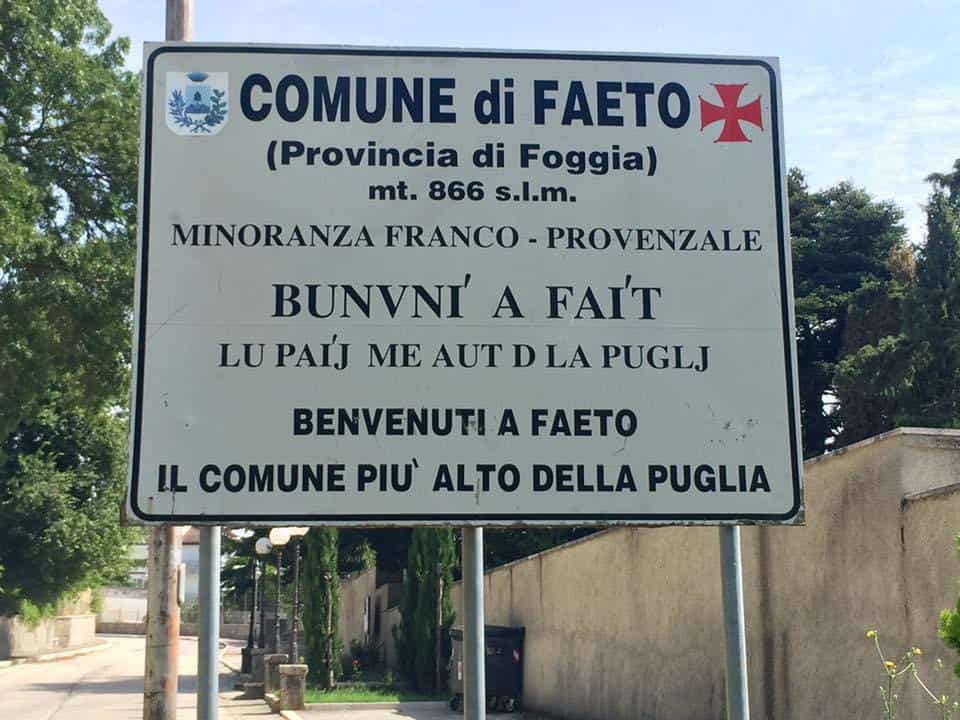 (This is a modified and updated version on an article first published in: 1 University Place: Volume 1 / Issue 2 / Spring 2015)

Nestled in the rolling hills of the Daunian Mountains, in northern Apulia, lies the village of Faeto. The Faítare, the village’s residents, affectionately call it “Faít”. Though this may seem like a cute moniker, or a southern Italian dialect place-name, neither is the case. In fact, the name is not Italian at all, it is a dialect of Arpitan, a romance language spoken in the Swiss, Italian, and French Alps (The neighboring village of Celle San Vito also speaks a dialect of Arpitan). So what exactly is Arpitan?[1] And why is an Alpine language spoken in southern Italy?

Arpitan is traced back to the 12th century where it most likely derived from “langues d’oïl” (French languages). The language gained recognition thanks to the linguist Graziadio Isaia Ascoli in the late 19th century. He was one of the first scholars to differentiate Arpitan, and its dialects, as an individual language. He classified this language as Francoprovençal. He argued that it contained elements of French (Franco) and Occitan (Provençal) but was still distinct from both. Nevertheless, in the late 20th century, the name “Arpitan” has taken hold because it links the language to its home region by/in the Alps. Its dialects are diverse, ranging from Vaudois in Switzerland, Savoyard and Lyonnais in France, and Valdôtain in Northern Italy. Faetar, the language of Faeto, on the other hand, is even more distinct because of the influences from southern Italian languages.

Naturally, due to its location, Faetar has incorporated many elements of Apulian (the regional dialect) and Italian. According to Naomi Nagy, a professor of language at the University of Toronto, who is also the authority of Faetar in the Americas, states, “Faetar phonology resembles that of neighboring dialects, but is distinguished by the phonemic presence of schwa and a process of variable deletion of post-tonic segments and syllables. It differs from other Francoprovençal langaues [Arpitan] in having phonemic geminates word-medially and phonetic geminates at word boundaries. The morphology is similar to southern French dialects, with post-verbal negation, little agreement marking, and obligatory subject pronouns. It is distinct in that double subject pronouns are frequently present and reduplication is used for emphasis.” Faetar’s origins are in 14th century.

The actions of a monarch are why this Alpine dialect is spoken in southern Italy. Charles of Anjou: Count of Provence, Forcalquier, Anjou, and Maine was a French prince and brother of Louis IX King of France. Charles of Anjou was an ambitious man and he desired a kingdom of his own. In 1265 he was crowned and sanctioned by the Pope as King of Sicily (which is modern southern Italy). He then had to acquire, by conquest, his kingdom. This is the origins of Faeto’s history.

Charles of Anjou brought with him numerous soldiers who were native Arpitan speakers. There are several debates about the years in which these Arpitan speakers began to colonize the region around Faeto. Historians have settled on two theories. One side argues that in 1266 after the Battle of Benevento, Arpitan speakers settled in the region. They conclude the town was established in either 1268 or 1274. The other side holds the position that soldiers left by Charles of Anjou in the fortified center of Crepacore eventually called their families down to Italy and then around 1340 established Faeto. Though there are still arguments over the exact founding of the village, historians agree that Faeto is connected to Charles of Anjou’s medieval conquest of Southern Italy.

It is remarkable how this Arpitan dialect managed to survive in southern Italy for over six hundred years. It is also extraordinary how the actions of a medieval monarch have had a clearly direct influence on the ethnic and linguistic backgrounds of people in the 21st century. Faeto’s present is that of living remnants.

For further reading and enjoyment:

Linguistics Professor Naomi Nagy has put together a webpage dedicated the basics of Faítare.

A fantastic and free “toponomastica narrativa” by Giovanni Agresti.

For great photos of Faeto and its surrounding check out Ennio Mascia Photos.