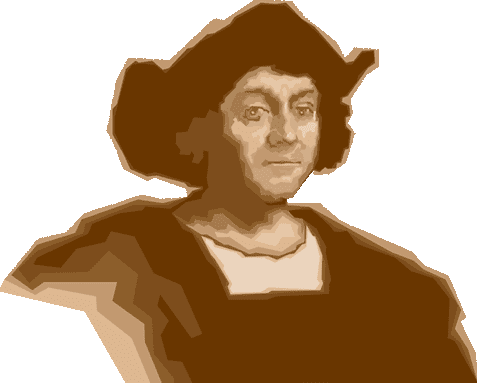 Americans of all ethnicities and cultures have staked their claim to “the land of the free.” But are we brave enough to face the dark side of the American story? Those who inhabited this land before the Europeans, Asians and Africans arrived, have suffered continuous attacks upon their lives and culture. They have endured a genocidal assault. And yet, they are alive and exist amongst us.

I am calling on Americans of Italian descent for understanding and inclusion of our history on the land called Turtle Island by the Haudenosaunee peoples. America contains diverse truths based upon the historical record and the many voices among native peoples and those who colonized the Western hemisphere. History does not begin nor end with the written word.

Christopher Columbus, a sailor sponsored by the Spanish monarchy and the Roman Catholic Church, represents cultural pride and individualism for many Italian Americans. According to the myth of the man, on October 12, 1492, he “discovered” America. But Cristofero Colombo did not discover the islands of the Caribbean. They were occupied by Arawaks, Caribs and Tainos. And upon what we call North and South America, there lived millions of people, and hundreds of distinct nations, for thousands of years. The Euro-centric view of “discovery” is misleading and offensive.

Columbus and others in the age of European exploration and colonization, were given carte blanche by Roman Catholic popes beginning in 1452. Alexander VI was the pope during the voyages of Columbus. The Doctrine of Discovery directed Christian explorers to take any land and to kill those who did not accept Christianity. Thankfully, today, Bishop Douglas Lucia of Syracuse, NY, is speaking out against the Doctrine of Discovery. “ He is revealing plans to ask Pope Francis to repudiate theological teachings used for centuries to justify the subjugation of Indigenous peoples.” (Religion News Service 7/1/21 by Jack Jensen)

Aaron Kierbel, introducing Dr. Ruba Marya and Raj Patel’s book “Inflamed: Deep Medicine and the Anatomy of Injustice,” writes, “European colonization transformed the planet. Through slavery, genocide and disease, colonists brought with them a cosmology that changed how people relate to each other and to the living world around them.”

A contemporary Onondaga/Turtle Clan mother, Freida Jacques, has told of meetings with Father David McCallum, a Jesuit priest, and a few leaders of the Onondaga Nation in recent years, discussing the impact of the Doctrine of Discovery upon native peoples. McCallum later engaged Bishop Lucia about the doctrine. Members of the Akwesasne Mohawk community also informed the bishop of the decree.

The Reverend Martin Luther King, Jr. said, “Our nation was born in genocide.…We are perhaps the only nation which tried as a matter of national policy to wipe out the indigenous population. Moreover, we elevated that tragic experience into a noble crusade.” And some Americans still believe in the doctrine of our country’s “Manifest Destiny.”

In his journal from 1492, Columbus wrote of the native people he encountered: “…They would make fine servants.…With fifty men we could subjugate them all and make them do whatever we want.” And this despite his experience of the native trait for generosity and sharing. In seeking more support for his next voyage, he exaggerated the riches he’d found, and promised “.…as much gold as they needed.…and as many slaves as they ask.”

Some western scholars have for centuries bought into the myth fabricating a heroic Columbus. But do Italians want to honor a man who brutalized those who did not deliver gold?

Matteo Tamburini teaches mathematics at Northwest Indian College, Bellingham, WA. Tamburini was born in Florence. He has spent the last ten years learning about ancestrality at the college. He tells of his family discussions about Columbus: “I think that in order to help Italians in Italy understand the Indigenous experience in the ‘Americas’, a useful analogy/thought experiment could start from the German invasion of Italy during World War II. Imagine if the Germans had won the war, and maintained their military presence in Italy—exacting a very high toll in blood and conducting many more massacres of civilians.

“Then they forced everyone to learn German, prohibited pasta and forced everyone to eat sauerkraut; then set up residential schools where kids were punished if they spoke Italian, and many were subjected to horrible physical and sexual abuse. Imagine if they tore down statues of Garibaldi and replaced them with statues of one of the Ostrogoth kings who had overthrown the Roman Empire and wrote history books that traced back the moment in which the decadent Roman Empire had been reinvigorated and civilized with superior Teutonic greatness.

“The memory of the German invasion is still part of many people’s memory, or of the oral tradition within their families—or at least, it is in mine. I have found that this analogy creates a different framework for people’s minds to understand the dispute over Columbus.”

Columbus was made a culture hero for Italian Americans as a consequence of the historic xenophobia expressed towards Italian immigrants throughout American history. However, in spite of the lynching of eleven Italian Americans in New Orleans in 1891 and all the demeaning stereotypes and cultural characterizations of Italians, we have survived and thrived. Our food, song and joy of life have lifted us, and we have made countless contributions to American life.

The myth of Columbus served another purpose: It celebrated individualism and honored the myth of conquest and personal enrichment. The sad story of his delusion is that right up to his death in 1506, he believed that he had found a new route to the East Indies.

With regard to a movement in Syracuse, NY, to reassess the position of a statue of Columbus, this statement was recently issued by Neighbors Of the Onondaga Nation (NOON): “While we respect and understand the effort and sacrifice of working class Italian Americans in funding the statue originally (1932), NOON believes given more accurate information about Columbus’ legacy, that it is time to move forward and have the (traffic) circle reflect our rich heritage including the Onondaga. We are proud to support Mayor Walsh and to collaborate with Women of Italian and Syracuse Heritage to show that support publicly.”

As controversial as the situation of statue removal currently is in America, there are enough facts to warrant the removal of Christopher Columbus from the pedestal of American and world history.

It is important to understand the historical context of Christopher Columbus’ venture. It wasn’t just about him. It was a historical trajectory supported by the monarchies of Europe and the Catholic Church. The explorers were contractors/mercenaries seeking riches, souls and adventure. There is a consensus that the vast majority of natives in the Americas died from viruses introduced by trade winds and the colonizers themselves. We must also bear in mind what was written by Bartolomeo de las Casas, who sailed with Columbus. He noted the atrocities committed by the invaders against the indigenous peoples.

This savagery didn’t end with Columbus. George Washington ordered General Sullivan to exterminate the Haudenosaunee from New York, and some decades later Andrew Jackson—who had said to the Cherokee, “….I am their friend….for as long as the grass grows or water runs. I will protect them.”— ordered their removal from their Eastern homelands to Oklahoma via an awful migration that came to be known as the Trail of Tears.

Furthermore, within recent months the horrific legacy of “Residential boarding schools” have been revealed in both Canada and the United States, as thousands of unmarked graves of Indigenous children are being discovered.

Freida Jacques advocates for healing not only for the victims of injustice and brutality, but those who participated in the abuse and secrecy. “Those who are still alive who participated in the abuse or witnessed it need to be included in the inquiry of what happened in these schools. Someone witnessed the child dying, someone dug the grave, someone carried the child to it and they were told not to tell about it. Sharing what happened may cause conflicted feelings for the nuns, but I hope that they will at least recognize that their actions or inactions caused harm and feel regret. It could be helpful if all who were involved could review their beliefs about Natives. Resolving to change their attitudes of superiority and dominance, this should be a goal in this effort.”   While survivors of the boarding schools carry the generational trauma of genocide, everyone suffered from the secrecy and silence.

The movie “Indian Horse” is a powerful tale of a survivor of the Canadian residential schools. The dramatization tells this true story of a young Ojibway boy who loved hockey and achieved greatness despite the racism he faced every time he got on the ice.

We cannot change the past but we can face the awful truth of what was done and decide what kind of future we want. The US government can honor the treaties with indigenous nations. Americans of all ethnicities can respect the rights of native peoples to be who they are.

This begs the question: What does it mean to be American? Langston Hughes wrote, “America never was America to me, and yet I swear this oath – America will be.” E Pluribus Unum.

Our future awaits us. Instead of dominance and subjugation, there can be respect and cooperation. In a free and democratic society, there’s enough room for everyone to express themselves. Italian culture has given much to America and the world throughout history. No one individual can embody the entire legacy that Italians carried with them as they made homes throughout the world.

Some Americans of Italian descent celebrate Italian Heritage Month in October. Many reject Columbus Day, instead honoring America’s first inhabitants with Indigenous People’s Day. We can celebrate our foods, songs and stories every day. And it is especially worth noting at this time of giving thanks, that sixty percent of the foods of the world originated in the Americas, including such staples of Italian cuisine as tomatoes, squash, beans, corn and potatoes.

It is about time that Italian Americans stop dragging their feet and face the truth of who and what Columbus represents. Instead we can celebrate our families and ancestors, remembering their sacrifices and progress, as we join the circle with all who live on this land.