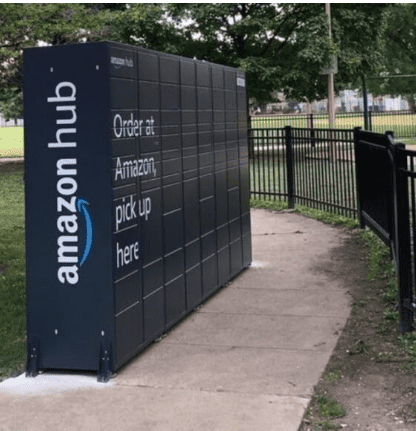 Chicago recently made headlines for turning public parks space over to Amazon package lockers. But those lockers are only one example of Amazon and public officials using public-private “partnerships” to give away public resources and harm communities.

Residents of Chicago who went for a stroll in a local park recently might have come upon an unexpected obstruction: an Amazon locker partially blocking their path. Thanks to a deal Amazon cut with the city’s parks department, forty-nine Amazon lockers—where customers can pick up and leave packages—were deployed in public parks, with another fifty-three planned for future placement.

Parkgoers and local lawmakers quickly revolted against the private co-option of public space. The outrage increased after the nonprofit news organization Block Club Chicago used a public records request to reveal that the city would receive, at most, $137,600 in payment from Amazon, which made a $7.8 billion profit last quarter alone.

“Amazon should not be occupying public space regardless of what they offer but we have to note that 137K is a slap in the face,” tweeted Chicago alderwoman Rossana Rodriguez. Amid the outcry, Amazon removed the lockers and halted deployment of others, pending the results of a project review.

This incident is emblematic of two trends, neither of which are good for taxpayers or local communities: Amazon’s increasing use of public resources to entrench its monopoly, and Illinois and Chicago’s reliance on public-private “partnerships” that result in public costs and privatized benefits.

Amazon has received more than $4 billion in state and local subsidies across the country, most of which has gone toward building out its warehouse and distribution network. It uses that network as leverage to batter both rival retailers and small businesses that sell products on its platform. States and municipalities that use public funds to support Amazon’s network, in other words, are paying to harm their own local businesses and retail outlets.

Illinois has proven to be particularly fertile ground for Amazon. A recent investigation by WBEZ and the Better Government Association found that Amazon has received $741 million in taxpayer subsidies in the Chicago area alone, and that wealth was mostly extracted from Black communities.

In return, those communities received dangerous Amazon warehouse jobs, strained public services and increased pollution and traffic. There’s also constant low-level talk of Illinois building a third airport in the Chicago region, which would become a hub for Amazon as it works to put UPS and FedEx out of business.

Blocking park paths with its lockers, then, is simply par for the course.

Sadly, letting Amazon pull dollars out of local communities and giving it control of key public infrastructure goes along with the region’s long history of allowing subsidization and privatization projects to go awry.

Since 1985, Illinois has doled out more than $8 billion in state and local tax incentives. Among those deals are several high-profile busts. For example, in 1989, Sears received half a billion dollars to locate its headquarters in Hoffman Estates, a Chicago suburb. A study last year “found no evidence that the massive package of tax incentives made a long-term difference to the economic well-being of Hoffman Estates compared to that of other similar nearby suburbs that did not make such corporate deals.”

In 1985, Mitsubishi received $250 million to open a plant in Bloomington-Normal. Predictions that the plant would create thousands of “ripple effect” jobs at auto parts suppliers never materialized and the plant closed in 2016, resulting in the layoff of 1,200 workers. Similar to Sears, Motorola Mobility received $118 million in 2011 to keep its headquarters in Illinois; following its 2014 merger with Lenovo, it engaged in several rounds of layoffs.

It’s not just massive company-specific deals that harm Illinois. The state’s premier economic development program, known as EDGE (Economic Development for a Growing Economy), in theory supplies general tax credits to corporations creating jobs in Illinois. A 2015 Chicago Tribune study, though, found that two-thirds of the corporate recipients didn’t fulfill their job creation promises. “State officials can’t say how many jobs have been created through the job program; nor can they say how many jobs EDGE companies have eliminated,” the Tribune found.

Last year, a state audit found that Illinois is still not doing enough to track what those corporations are doing with public funds.

Similar problems have plagued the city of Chicago itself, issues that have been exacerbated by the penchant of several city administrations to privatize public services, leading to a toxic stew of pro-corporate policy.

For example, Target received local tax breaks to open stores in tonier parts of Chicago while it was reneging on promises to maintain stores in underserved minority communities. It was only after Target announced its plans to close those stores that Mayor Lori Lightfoot vowed to get tough on corporate dealbreakers. The shuttered sites on Chicago’s South Side lay empty for two years.

Likewise, the city council only passed a law allowing Chicago to claw back tax breaks from corporations that fail to keep their promises after a corporation that had received nearly $20 million in public funds botched a coal plant demolition, covering a neighborhood in dust.

But those incidents pale in comparison to the city’s leadership actively selling off public goods for private benefit. In 2008, Mayor Richard Daley’s administration famously allowed private interests to manage the city’s parking meters for seventy-five years. The corporation in charge of them today—Chicago Parking Meters, a consortium led by Morgan Stanley—has already recouped its investment, with more than sixty years of profits left to go. For drivers, rates on parking meters more than doubled from $3 to $6.50 per hour between 2008 and 2013, while service deteriorated. The city has even had to compensate Chicago Parking Meters for “adverse events” such as street festivals and street repairs that cause meters to be out of service.

Former mayor Rahm Emanuel even seems to have leveraged his plan to privatize the city water system’s customer service program into an ambassadorship to Japan, using the effort to cozy up to Japanese corporations.

So turning over public park land to Amazon for a pittance fits in with the much larger pattern of lawmakers selling Chicago’s public infrastructure off a bit at a time and letting corporations build their businesses on the back of Illinois taxpayers.

There are a few state bills that could help mitigate some of those harms. For instance, lawmakers in both the state Senate and the House have proposed having Illinois join an interstate effort to reduce and ultimately eliminate company-specific corporate subsidies. Democratic representative Michael Halpin has also authored a bill to ban non-disclosure agreements in economic development contracts, which is a key tactic Amazon has used to hide its subsidy efforts in the Chicago area.

It would be nice to think that such efforts and the swift public condemnation of the Amazon lockers are a signal of a new approach to public-private partnerships in the Windy City. But if you believe that, I might have a public park to sell you.

Editor’s note: This article was reprinted by permission of the author and first appeared in Jacobin Magazine.