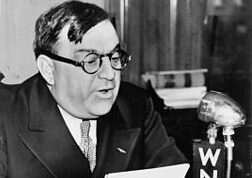 The exclusion of Fiorello La Guardia’s leftist brand from his biography represents a gross distortion to the image of America’s greatest mayor, according to professor Gerald Meyer.

New York City’s La Guardia is a beloved figure, Meyer stated, “But what’s left out of his story is his leftism.”

Meyer, a professor at Hostos Community College in The Bronx, N.Y., is co-editor of “The Lost World of Italian Radicalism,” and author of “Vito Marcantonio: Radical Politician.” So he has some experience with cases like La Guardia’s.

The Little Flower’s leftism, Meyer asserted, was his motivating force, but in the retelling of his political career, across many biographies, is unfailingly cast aside.

“It is also very belittling to La Guardia,” said Meyer. “It’s as if he didn’t have ideas when he was actually a brilliant man. He was an ideologue. His demands in Congress presaged the entire New Deal.”

The omission leaves an incomplete picture of the man as thinker, as visionary, and as an effective politician, Meyer stated.

The talk tracked La Guardia’s life chronologically, and was divided into phases; the first being from his birth in 1882 until 1910, when he traveled to Europe and landed a job in Trieste.

Youth as Key to Understanding

Meyer contended that, more so than other larger-than-life historical figures, the keys to La Guardia’s formation are found in his youth.

His father was an anti-clerical Jacobin and his mother an Italian jew with roots in Sephardic Spain. Upon arriving in America, the family Americanized; joining the Presbyterian Church and moving to Prescott, Ariz., where father played music in a U.S. Army ensemble.

There, Meyer noted, La Guardia saw discrimination against Native Americans and immigrant laborers alike. His own indignities suffered as the lone Italian at school made him aware of what it meant to be an outsider, and to the fact he himself was an outsider.

When the Spanish-American War ignited, La Guardia’s father, Achilles, was stationed in Tampa, Fla., where he contracted food poisoning from military rations that ultimately killed him.

“La Guardia comes to view the system as responsible for his father’s death,” Meyer explained.

The remaining family returned to Europe. La Guardia signed on at the U.S. Consul in Trieste and morphed into a linguist who could speak Croatian, Italian, and Yiddish.

“It’s all going to make him a great man and a radical,” said Meyer.

Highlighted was one little-known incident that would foreshadow La Guardia-in-the-making.

Trieste was an embarkation port for New York-bound immigrant passage. Those who trekked to the Adriatic coast had often broken themselves economically to get on the boat to America. Many times, Meyer noted, they were unceremoniously shipped home for not having been cleared medically, ruined.

“Without permission, La Guardia wouldn’t let anyone on the boat who hadn’t had a physical, to prevent them from making the journey only to impoverish themselves,” Meyer recounted.

The anecdote illustrates La Guardia’s ability to work against the grain, to do right, to find ways to benefit ordinary people, said Meyer.

Upon his stateside return, La Guardia took a law degree and fell in with the radical literati who populated his Greenwich Village neighborhood. He ran for Congress and won, though he was not yet La Guardia fully formed.

His primary influences, Meyer stated, were from the southwest: “Populism is ingrained in him. It was pro-people, not class-oriented, and didn’t seek the abolition of private property.”

After serving two terms in Congress, La Guardia enlisted to fight in World War I. He reentered politics upon his return as a New York City Alderman before launching a second run at Congress, this time from a district in East Harlem.

With the Democratic Party city machines being the natural enemy of populists, and the Irish pols that ran them hostile to Italians, La Guardia signed on with the Republican Party and campaigned to victory.

But the needs of his working-class district pushed La Guardia leftward, toward socialism. “And he took to it like a fish to water,” said Meyer.

La Guardia’s hybrid ideology of urban populism focused on the regulation of corporate activity. “There really isn’t another like him,” Mayer stated. “His uniqueness was very valuable, but also hurt him, because he was, again, an outsider.”

That status meant La Guardia was starved of meaningful committee work. “So he took to the floor of the House and became a great orator, speaking on every imaginable issue, including agriculture. And there are no farms in East Harlem,” emphasized Meyer.

“His radical voice becomes stronger and stronger,” he continued. “It’s about protecting. He talks about happiness and how people have a right to happiness. It’s not just materialistic. It’s humanistic in a very deep way.”

Effectively ceding his seat to Vito Marcantonio, La Guardia ran for mayor of New York City on a Republican-Fusion-Progressive ticket, and won.

“His actions are quite remarkable,” said Meyer. “His arrival as mayor coincides with the Great Depression and his marvelous collaboration with Franklin Roosevelt. His vision is breathtaking. He creates a social democratic metropolis, piece by piece.”

The mayor could see the value in New York’s surplus of very talented, unemployed persons, which made it a perfect recipient for the Works Progress Administration money.

“New York was a demonstration project which showed that government can work, that the money is not wasted,” said Meyer, who highlighted achievements in public housing, subway extensions, playgrounds, swimming pools, an opera house, sanitation strategies, and sewage infrastructure.

“Nothing was left untouched and New York was transformed into the magnificent city we still have,” said Meyer.

The year 1936 saw the formation of the American Labor Party as a way of capturing socialist votes that would not otherwise go to the Democrat Roosevelt.

Meyer suggested the American Labor Party (ALP) was the most important third party in American history. Until it’s demise in 1950, with Marcantonio’s defeat, the ALP garnered about 15 percent of the vote, which gave it tremendous leverage on Gotham’s political playing field.

“In East Harlem it was a majority party and the second largest in the Bronx,” according to Meyer. “La Guardia immediately joins up, along with Marcantonio: A fact so unknown, it is just shocking. Why wouldn’t the history books and biographies mention this?”

This article is reprinted with permission from the blog Marcantoniana : Items from the Life and Times of the Marvelous Vito Marcantonio.