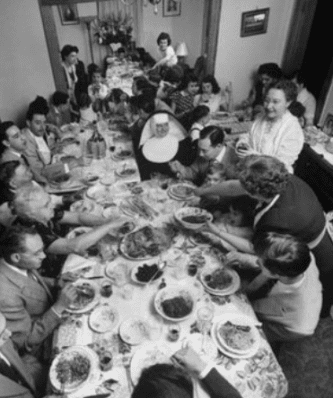 It’s October, and for many that means fall colors, decorative gourds and talk of Christopher Columbus in the air. Maybe it’s possible to get through the month without a pumpkin-spiced anything, but the Columbus controversy is back in the news, making for an abbondanza of difficult conversations around the dinner table. How do you talk to old-school family members about the dethroning of an Italian American idol? Here are five ways to help start—or stop—the conversation.

Growing up in the U.S., we were all taught the story of Christopher Columbus and his voyage with the Niña, the Pinta and the Santa Maria. (I can envision the construction paper cut-outs on my grammar school bulletin board right now.) But Columbus wasn’t all he was cracked up to be. It turns out that he was a heinous killer, and unlike other conquerors of his day (who also did their share of killing and pillaging), he was actually put on trial and found guilty on moral grounds by the royal court of Spain—during the time of the Spanish Inquisition, no less.

And now that we know the truth, we can’t continue to ignore the facts.

2. As Italian Americans, we took special pride in the Italian man and the story.

Of course we did! Columbus was our stamp on the formation of the United States, and symbolized Italian greatness. But Italy didn’t exist as a country until 1871. Some recent research posits that he may not have been of Genovese extraction: some scholars now think that he was the illegitimate son of Portuguese royalty, fluent in Portuguese, with no knowledge of any Italian dialects (Standardized Italian, as we know it today, had yet to be established). Regardless, Columbus didn’t sail for Italy; he sailed for Spain. And Spain put him in jail for his extreme brutality against the indigenous people he encountered.

3. The naming of the holiday is a consolation prize, an apology for the mistreatment of Italian immigrants and Italian American citizens.

In 1892, on the heels of the infamous lynching of 11 Italian Americans in New Orleans, a one-time Columbus Day celebration was declared by President Benjamin Harrison, in an attempt to quell the growing violent anti-Italianism in America and to commemorate the 400th anniversary of Columbus’s 1492 voyage. It wasn’t until 2019 that an apology for the lynching of those Italian Americans would come—more than 100 years after it happened.

The idea of Columbus as hero likely arose thanks to Washington Irving’s 1828 publication, “A History of the Life and Voyages of Christopher Columbus,” which glorified the travels of Columbus, erroneously claiming that it was he who proved that the earth was not flat. (Vasco de Gama took the credit for it, even though Aristotle was already teaching the spherical nature of the earth in the 4th Century BC.)

Due to lobbying efforts by the Knights of Columbus, the day was declared a national holiday in 1934. Yet less than ten years later, more than a half million Italians and Italian Americans were targeted and harassed during World War II, with restricted freedoms and curfews. Thousands were interned. In 1942, President Franklin D. Roosevelt used Columbus Day to announce the removal of the “enemy-alien” designation from Italian Americans, but it wasn’t until 2010 that any apology would come, and then, only from the state of California.

Millions of people lived in the “New World” before Europeans arrived, in complex civilizations and cultures: art, language, religion and traditions that they undoubtedly held close, just like us. But the arrival of European colonizers caused an end to their world as they knew it: Slavery, slaughter, forced religious conversion and occupation of land were just a few of the atrocities at hand. It is thought that 85% of the Taino population, the indigenous people that originally inhabited the major Caribbean islands (including The Dominican Republic and Haiti (formerly Hispaniola), Cuba, Puerto Rico, The Bahamas and The Virgin Islands) had vanished by the early 1500s, as a result of European contact, which sheds light on the push for the day to be renamed “Indigenous People’s Day” in many locations.

5. It’s not wrong to want to hold on to tradition. But we have better examples to celebrate than Columbus. The tradition of celebrating Columbus has become an embarrassment on many levels: a public display of how Italian Americans have been willing to cow to the whims of government; a celebration that ignores the cultural destruction brought on by the arrival of Columbus and other European colonizers in the presence of those whose ancestors were exterminated and whose cultures were maligned; and a clinging to a holiday and a man that we now know are mostly built on fiction.

But not all is lost! In the 500+ years since Columbus landed in the Americas, Italians and Italian Americans have accomplished so much. From Mother Cabrini Enrico Fermi, so many could be celebrated for their achievements in our own lifetimes: war heroes, firefighters, artists, writers, teachers, change-makers, probably someone you know, all worthy of a parade. (Poet Diane DiPrima offers a lengthy list in her poem “Whose Day Is It, Anyway?”) The end of Columbus Day would not be a slight against Italian Americans; instead it’s an opportunity to do better, to celebrate anew.