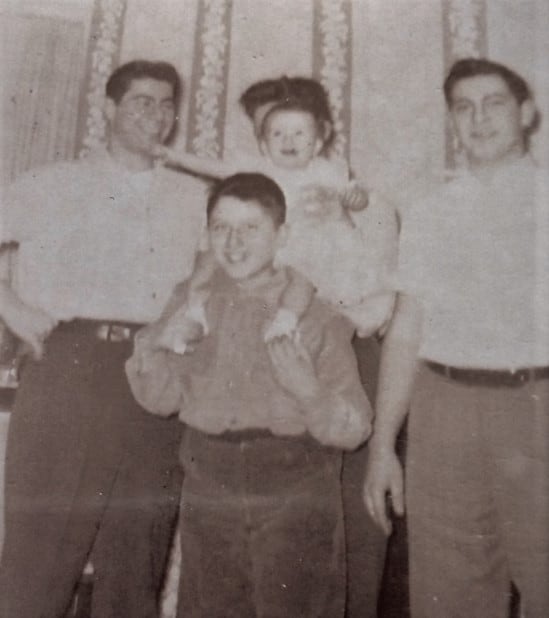 It’s Christmas season in 1960s Boston. After my mother dragged me up and down the escalators at Jordan Marsh and Filenes to try on frilly dresses, I could count on two rewards: lunch on the eighth floor of Filenes—white tablecloths and chicken a la king—and the awesome Enchanted Village created in 1958 by the president of Jordan Marsh. Mr. Minton’s Bavaria artisans created 80,000 pounds of Santa’s helpers, friends, pets, a general store, shoemaker’s shop, glassblower’s shop, and a sled named Rosebud.  He dedicated it to the children of New England to cast a spell of enchantment.

My grandparents would not have understood a ban against Christmas practiced by the Puritans of New England . They had emigrated from Italy in the early 1900s, escaping poverty and earthquakes.

Every Christmas Eve, we gathered for the seven fishes. Aunt Lena prepared lobsters, calamari with spaghetti, mackerel, cod, shrimp, clams, and my favorite: sweet eels! I heard how Aunty chopped an animal resembling a snake. She was small as I was, and fierce even in her cooking. “Put in lots of garlic. Your mother is afraid of garlic. Her cooking is more elegant. I’ve grown this garlic in my garden. I just pick it and eat it whole. It killed the breast cancer I had in middle-age.” Aunty Lena lived on to age 95.

Not only our bellies filled, but also our hearts with visits to our relatives and good friends. Aunt Josie and Uncle Jim lived on the third floor of a three-decker in Dorchester. My mother, my brothers, and I climbed up to the second floor landing, pausing out of breath as we spotted the old photographs of the Lauterella family, and waiting for the slight movement of the lace curtain behind the door. Amelia Lauterella was spying to see who would be visiting Josephina that day.

Upstairs, four clarinets greeted us. Great Uncle Jim taught his sons, Joe, Dom, Phil, and Anthony to play. Aunt Josie swept us up in her big bosom whispering mischievously, “Amelia will be coming.” Sure enough, a small woman with dark, wild eyes and white hair appeared. Aunt Josie feigned surprise and with a twinkle in her eyes, encouraged Amelia: “Come in and tell Patsy to come up.” Amelia moved straight down the long hallway, and with her large black shoes stamped on the wooden floor three times. To our delight, Pasquale Lauterella shyly ascended the stairs.

First came a huge antipasto. I craved anything salty: sardines, strong cheeses, olives, prosciutto, capricola. Next came the soup course: escarole with little meatballs. I ate the meatballs, leaving the escarole. Then Aunt Josie carried in a huge platter of pasta followed by meatballs, brociolis. We washed it all down with Uncle Jim’s homemade wine. A roast or two followed with vegetables and salad. The three of us females cleared the table. In the living room, Uncle Jim dozed off with a cigar in his hands, my brothers and cousins excitedly talking together. We returned to a colorful table of Italian pastries, fruits, nuts, and liqueurs. The Lauterella neighbors returned to play a game of lotto. I suppressed a giggle as Amelia called out the number 16: “Sica-Steen Sweet!”

Christmas joy comes through connections, not consumption. It takes a sweet village of all ages to enchant and promote joy, kindness, and peace.

Editor’s note: The featured image on the “Essays” page and the home page is the author surrounded by her brother and cousins; photo taken in the 1950s.