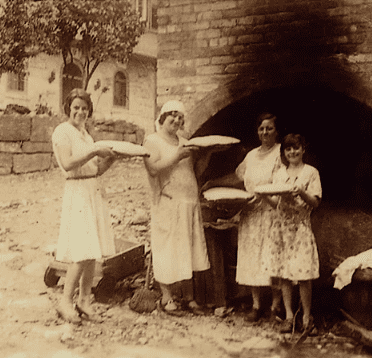 Editor’s note: This is part two of the “Minestra” series by Ms. Clapps Herman, a series of narratives built around recipes from her family.

This is my mother speaking about making the weekly bread each week. Someone just told me that during the depression 20 to 30 men might come on any given day for a plate of macaroni, a glass of wine and my grandmother’s bread. They’d work for their meal. That’s how all of the stone walls were built on the farm.

We made the dough the night before we baked our bread for the week on Saturday. My father bought hundred pound bags of flour for my mother to use. She filled the cong’, the big pan, with flour, one part whole wheat and two parts white flour and a little semolina. We put the cong’ up on a stool. The cong’ was a little less than a yard across, about thirty inches. It was wider at the top, and tapered down a little toward the bottom. All the girls took turns helping her. She’d make a well in the center of the flour and pour tepid water in. She had already heated the water. It couldn’t be too hot—not too hot and not too cold. She slowly crumbled yeast into the water until it all was dissolved. She used only one yeast cake. (That was all she needed because we left it overnight and in the morning the bread was up.) Then she’d pull a little flour into the well of water, a little bit at a time, slowly incorporating the flour until it was all mixed together.

Or sometimes she’d supervise one of us girls and we’d do this work while she added what else the dough needed. That was when she added a handful of salt, for example. And maybe a little semolina. If the dough was dry, she’d add a little more tepid water. Whoever was working the dough would pull up a bit of dough at a time and knead it down in the pan. You’d walk around the outside of the pan to get all the flour mixed into the well of water and to knead dough, pulling a little more, until Mama was pleased with the consistency.

Then we covered the pan with linen cloths. Over those we put blankets, any flannel blankets around, because we needed to keep the heat in to make the dough rise.

We did this on Friday night just before we went to bed. In the morning, my mother would make us make fried dough for breakfast. We’d dip the fried pieces in sugar and that was our breakfast on Saturday. After breakfast we made our bread for the coming week.

Now with the oven, you had to build the fire. We’d go out in the woods to collect the wood to start the fire. You had to build it very carefully. First you put two large logs down, then you put two other big ones across, this way and that way across, like tick-tack-toe. You kept the middle clear; you built up from the biggest pieces on the bottom, to the smallest on the top, so that the largest logs would burn slowly. In the center, you put the kindling and the paper to start the fire. Once you built that fire, you had to keep watching that oven constantly. When the sides of the oven turned kind of grey, then it was practically ready to start the baking.

When the charcoal was red, that meant the oven was ready, and we’d bank the ashes over to the right. The embers were amber colored. Mama would take a handful of flour and throw it in the middle and see if it charred. If it turned brown too quickly, that meant that the oven was still too hot and we had to wait a little longer before we put anything in.

We had oiled the pans after breakfast and spread the dough for fugazz’ and apizz’  (foccacio and pizza). Bread got fixed in the pans in the morning when we got up.

The first thing you put in the oven—this was very important—once it was ready, was the fugazz’ because that needed the hottest oven. We’d put oil, salt, pepper, crushed red pepper, garlic, oregano and maybe a little basil on it. After that, the ‘a pizz’ would go in next.  On that we put my mother’s canned tomatoes and her homemade cheese.  Sometimes she put a layer of dough, then a layer of cheese, then another layer of dough with her tomatoes and the rest, whatever she felt like doing. We ate the pizza for lunch on Saturday.

Then you would have three big pans with two round loaves in each pan. They were big. Maybe fifteen inches, enough for the whole week.

She’d take a mappine’ and make a ring on top of her head and balance one pan up there. She carried two other pans at the same time; one in each arm, all the way down the long stone steps from the kitchen to the oven. She held herself so straight. What balance she had. Carrying one pan down was hard enough, let me tell you!

Before we put the bread in the oven, we’d come down with a knife, and make slices down both sides of the loaves and in front and back, and leave room for the bread to grow. That was the last thing to do before it went into the oven. The oven would bake your bread. You had to be very careful that you did everything just right so the bread would come out good. Those cuts were important to let the dough rise up more as it was baking.

When we ate, my mother would hold the round loaf in the crook of her arm and cut the bread, pulling the knife toward her. It was out of this world. You can’t believe how good it was when you put my mother’s homemade butter on the bread. When I get hungry now that’s what I have a vogli for (pronounced “woolie,” our dialect word for yen, from the Italian voglia), my mother’s bread and butter. People went wild for my mother’s bread. I remember Frank Donnaruma stuffing it in his pockets.

Sometimes, we’d dry the prosciutto and capicollo in the back when the oven was going and we were baking the bread. (There’s a second compartment in the oven that you open from the back—behind the main chamber—for drying and smoking.) Other times, when the bread was baking, we’d go in the woods behind the house and collect the nuts—hickory, butternuts, wild walnuts or whatever Mother Nature would give us—and put them in the back of the oven. We’d save them for the winter to eat. It would give us something to do in the winter at night. We’d crack those nuts and eat them.

Of course, we roasted suckling pigs, twenty/twenty-five pounds, and chickens, when we had the large crowds in the summer. We ate under the grapevine in the backyard, with the wine and the cheese and the bread.