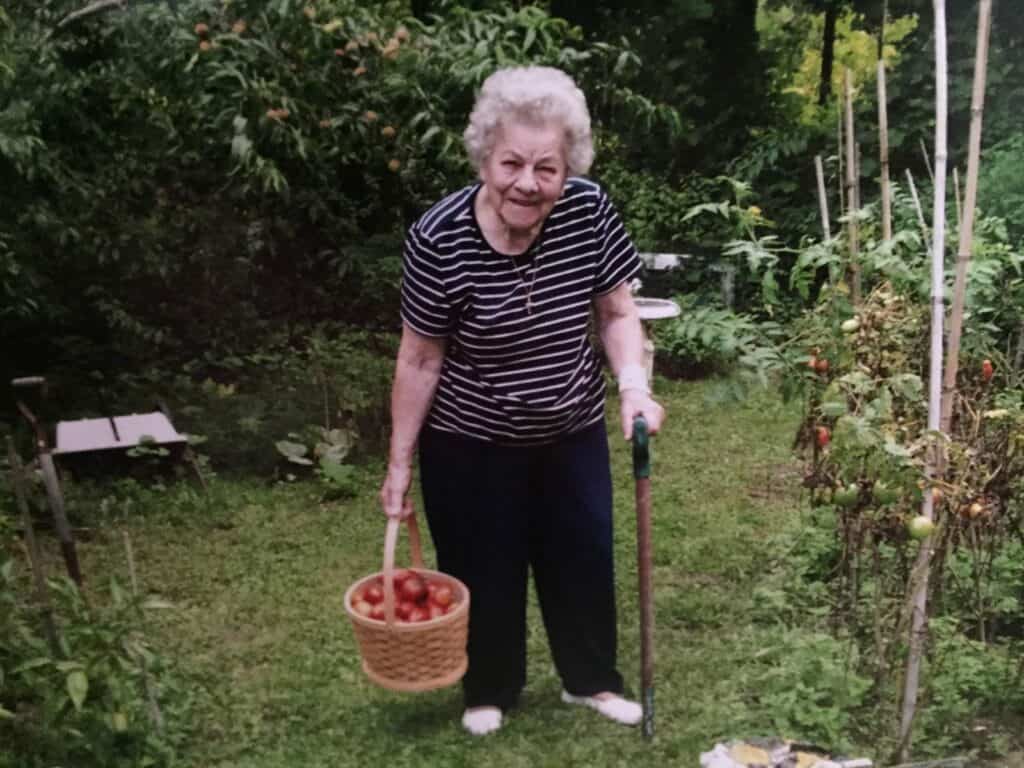 We always had sausage for lunch on Saturdays, because we were always making the sauce for Sunday macaroni. Every Saturday started the same way. First my mother, my sister and I cleaned the house, then we started the sauce. Two pounds of sausage, one hot, one sweet, two pounds of ground meat for the meatballs. Only sometimes braciola. My mother’s Tolvese grandmother put in chicken too. But we never did. We made it Aviglanese style because that’s what the wife does. She learns the sauce of her husband’s people so he’ll always have the sauce from his childhood. My mother studied the Aviglanese recipes from my father’s grandmother, Mammanonna. It was a point of pride that women were great cooks and that they learned their husbands’ family recipes perfectly, too. When my mother was first married, she made only one pound of meatballs and one pound of sausage. But when my father came home from his half day of work—he always put in an extra half day to get ahead of the work week—he’d smell the sausage browning in the pan, and he’d fork out a couple of pieces, one or two meatballs. When my mother asked him what he was doing, he said, “I can’t even eat in my own house?”

“One time he ate all my meatballs and half of the sausage, I had nothing left to make the sauce with, so after that I figured ‘Hey it’s his money, I’d better get enough for him and for the sauce.’”

To me the sausage in the sauce is just for flavor. By the time it’s soaked with the tomato sauce, I don’t really like the way it tastes, but the sausages that come hot out of the frying pan, after they’ve turned dark golden brown, with Spinelli’s fresh, crusty loaf of Italian bread, a salad, made in the summer with arugula and tomatoes from one of my aunt’s or uncle’s gardens… Now that’s a feast.

Here is how to make your own sausage

First go to Aunt Toni’s in Waterbury, whose son, Nick Padula, knows more about meat than almost anyone on earth, including where the most humane slaughter house is in Pennsylvania.

But if you can’t do that then you follow this recipe.

You must buy pork butt with the bone in, referred to by those who know, as bone-in pork butt. You ask for the following things:

You keep the meat cold until just before you start the process of making sausage—to avoid any possibility of bacteria setting in.

Before you do anything else, once you get the meat home, you must wash your hands thoroughly, again, to avoid any bacteria.

You take off all jewelry and put it to one side.

You buy the intestines. They are called hog casings, mind you, not pig casings. You should be able to buy them at any good grocers. You soak the intestines in luke-warm water to get the salt out.

We used 12 lbs of pork. Never freeze it. It will ruin the flavor.

Wash the table thoroughly before placing the meat on the table.  Aunt Toni had a plastic tablecloth on the table, which was perfect.