She died in a bus shelter outside the CVS.

A few blocks down, bunching traffic, congesting the neighborhood for hours,

before filing out, quiet and dark. We were left to wonder just what all the lights and sirens had been about.

And then the morning after, it was gone.

When curiosity turned to Google, the Trib reported a woman, disheveled, roamed the CVS with a kitchen knife.

Cops, finding her, now out in the bus shelter, yell to put the knife down. And failing that, attempt to tase her,

and fail at that.

So when they say she lunges at them with a knife, a kitchen knife, both officers regret that there’s no option

Each fire a shot.

It’s the one to the belly that kills.

I need more, and the Sun-Times doesn’t surprise in the way it disappoints.

“In the years leading up to her death Friday night, Michele Robey was no stranger to some aspects of the judicial system.

“In 2012, while unemployed and receiving Social Security payments, the 55-year-old filed for Chapter 7 bankruptcy, as she owed more than $300,000 to various creditors, mostly for unpaid mortgages on two properties in Elgin and various medical bills.

“Then last summer, she was arrested and charged with possession of a controlled substance and retail theft.”

In the fourth paragraph, we discover not that she was killed, but died.

All this sticks with me until it doesn’t, another cop killing momentarily remarkable because of where, not who and why.

But within months they start to appear, haunting the corner of Irving and Western just as often as me and the kids.

On the streetlight poll a floral painted metal cross with Michele Robey’s name inked on the back,

And at its base, a concrete cherub.

As the cherub begins to pit in the weather, the massive ComEd transformer box begins hosting potted plastic flowers and signs, every couple months a new one:

And red paint splatters all over the black paint of the box.

ComEd is not so quick as JC Decaux on these sorts of things.

When I walk past with my kids, they usually ask. It’s the way we get to CVS, to the playground park, to the Pokemon card shop. It’s at the crossroads of our small world.

And I go by on the way to that bus stop, fidget on her spot, quickly remembering all the forgetting I’ve done and bedeviled by the self-promises left undone.

Some angels of history are doing the work of remembrance

making and remaking a memorial that secretes a conscience for the city. 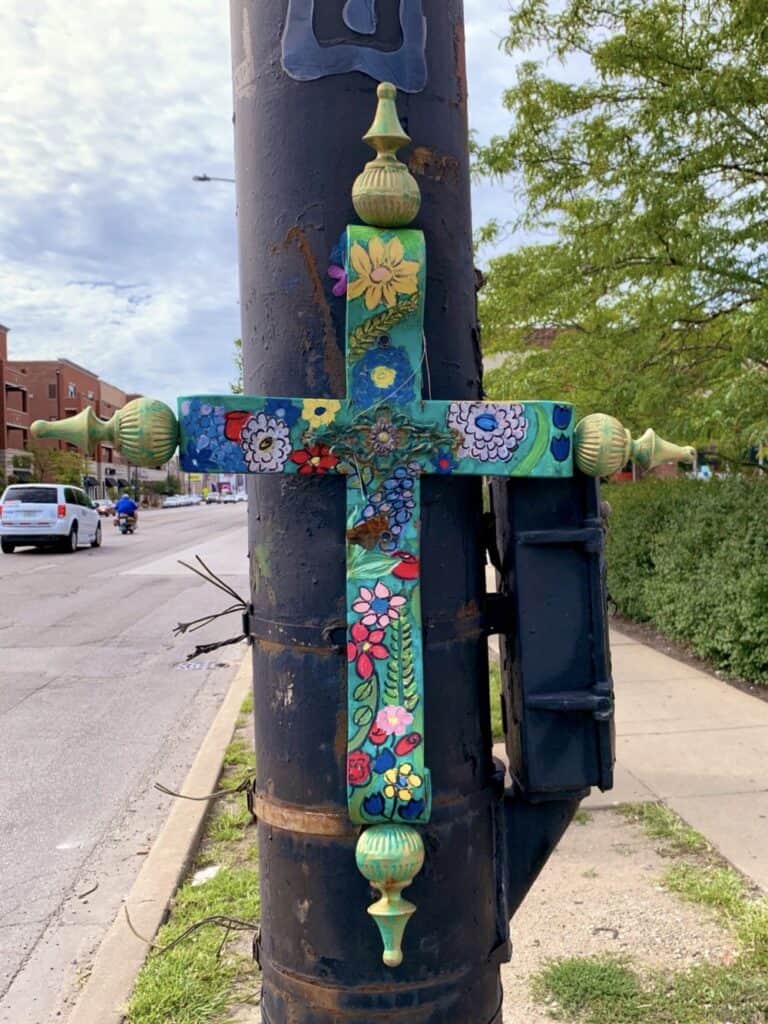