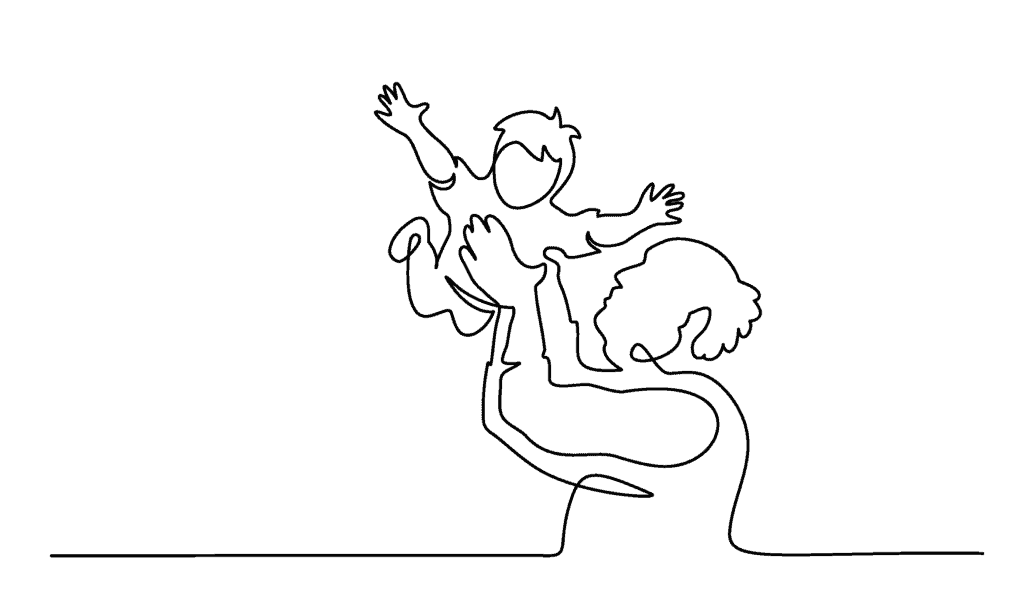 by Tony Del Plato
Translated into Italian by Danielle Vestita

“By each crime and every kindness, we birth our future.”

I love being a Nonno. I have enough good health to enjoy my three grandchildren. Sagan Alexander Del Plato will be 4 February 14, this year; Conor Ryan Kidney (or KaNAH in Brooklynese) is 4 ½, born May 4; and Orianne Olivia Del Plato, approaching 6, March 9. They bring me laughter and out-of-breath moments. They are sunshine with bursts of thunder and lightning. The apples of my eye. The sweetest, most loving little people. I rejoice to their spontaneous: I love you Nonno.

When meeting Sagan and Orianne at their house, Sagan is hopping up and down shouting “Hi Nonno!” Orianne is coy with my arrival. And as soon as I’m out of the truck, I start to jump up and down too, calling to them both. After a quick hug, Sagan asks me if I want to play. Yes, what will it be? “Let’s pretend drive,” he says. And Orianne jumps into the passenger side waiting for our imaginary trip to begin. Sagan runs around the truck to the driver’s side, stretches up, pulls the door handle and gets behind the wheel. With the engine off (keys removed), he begins shifting gears and turning the steering wheel as we “rumm rumm” down the imaginary road. Then he says, “You drive Nonno.” And he jumps out, runs around the truck, opens the passenger door and jumps into the seat as Orianne moves to the center. This routine plays itself out maybe eight or nine times before we move on.

For me, being a nonno is about giving love and attention to my children and their partners, especially to the grandchildren. Gina and I get to see Conor several times a year. They live in Denver, a 3 ½ hour non-stop plane ride from central NY. Conor endlessly wants to play “catch me.” I open my arms wide, pretending to close them around him as he ducks, and squeals with delight as he escapes again and again. He calms down and we pull out a Star Wars lego set. In between the active playing, puzzles engage him for a while. Eventually, we sit down, cuddling to read stories. After a day of being with Conor, we join his parents for dinner and catch our wind.

Being a Nonno means remembering being a child, a teen, and an adult…all wrapped in the same moment. I don’t fret. I’m in love with what I have. I have learned to go with the flow, and I encourage the kids to lead the way. Mistakes will be made and, hopefully transformed into learning moments. Rubbing a bruised knee, or laughing off an insult, wiping a tear. I do what I can to make sure everyone is safe now and in the future. For my grandchildren, I live in the present, as much as I can, when I am with them. At other times, I lean on wisdom much older than me in my efforts to be the best person I can.

I’m a 70-odd-year-old man playing games with my grandkids and having a blast. My son and his wife have a big ole house and yard. There’s plenty of room for a family to do anything. When it’s a nice day, we play hide and seek around the yard and barn. Then, I suggest we read stories or get a snack, so I can catch my breath. We live a stream of play, stopping from time to time to examine flowers, or a chicken’s egg near the garage. Natural wonders abound.

When we settle down to some stories, we share feelings of comfort and trust, snuggling up into the sofa for tales of wonder and bravery. Orianne brings out “We Are Water Protectors,” by Carole Lindstrom. It’s a tale about a heroic Ojibway girl protecting the water and earth of her village. Sagan’s favorite is “Paw Patrol,” with dogs and other critters playing out tales of danger and rescue, filled with adventure and amazing feats of heroism. The characters hypnotize the kids. Then Nonna suggests making muffins or cookies that we’ll snack on later. No one keeps track of time, and it flows until it’s time for me and Nonna to go. The spell ends.

I have not had grandparents to guide me as I traveled from childhood towards becoming an elder. My father’s mother lived with us until she died when I was about a year and a half. My mother told me stories of Nonna Caterina’s love for her only grandchild. Though she was old and feeble, she laughed when I chewed her nose. Another time I was ripping up one of my father’s books, and he was about to spank me when Nonna Caterina intervened, “Look how smart he is. Let him rip up the book.” I never met my dad’s father, who died before I was born.

I met mama’s parents for the first time in the summer of 1959 when I was 11 years old. I remember this because they met my sixth grade teacher, Ms. Cavella, who twitched like me. After many years petitioning the U.S. government for visas to America, Rep. Emanuel Celler helped secure their visas. My Nonno Vitantonio was a member of the Communist Party of Italy and a supporter of the resistance during World War II. He and Nonn’ Adolorata were from Grottaglie, Apulia, a village at the top of the heel of the boot of Italy. Nonno died shortly after his visit with us in America. Nonn’ Ada lived long enough to hold my hand once again when I visited mama’s hometown years later.

The main meal of the day was the most meaningful event of my family life. There were few acceptable excuses for not being at the kitchen table at dinnertime. Sharing food and doing the dishes brought us together regularly, ritually (as the oldest child, my job was doing the dishes and pots.) My mother said grace at every meal, often the only one taking a moment. Her true religion was food. When we didn’t finish our meals (which didn’t happen often), she would admonish us, saying, “It’s a sin to throw away food.” Or, “Think about all the hungry people in the world.”

Other than my mother’s garden, none of my family members from any generation spoke of the land we lived upon. My father’s side of the family were barons, with feudal roots and privileges. My mother’s family were poor peasants, owning little more than what was on their backs.

Having met the demands of raising a family, I can now be more of an observer and supportive guide. I comment minimally. Watching my nipotini grow, learn, laugh and cry. I am filled with warmth and trepidation, trying to imagine a brighter future for them. In these times of pandemic and climate calamities, it’s hard to see a secure and healthy future.

I feel a dire need to live in a right relationship with the world around me, including the land and water. I listen to indigenous leadership about collectively healing the wounds that colonization has caused. To do this for ourselves and the Earth now.

As I ask forgiveness, I learn to forgive. I make peace with those I’ve hurt. I go as far as I can, joining with others to remedy the harm done to one another and to Mother Earth. To protect our children as much as possible from the hazards and dangers of life that they may learn to band with others in mutual aid to a life, lived in balance with the laws of nature.

I feel the boy inside me. As a nonno, it’s confusing at times. My grandkids remind me about living in the moment. Playing hide and seek. Or pretend games. Being with my nipotini helps me forget my aches and pains. I know the freedom of living in the moment because that’s where my little relatives are. At times, I almost forget my age, though when I run, my breath reminds me. And the troubles of the world linger in the shadows.

The lessons of Indigenous peoples continue to inspire me. The Mi’kmaq people, led by the grandmothers, defeated the attempts by AtlasGas to store liquid gas in caverns along the coast of Nova Scotia, Canada. This echoes the victories closer to my home in the Finger Lakes of New York. After years of protest and civil disobedience, Crestwood/StageCoach ended their attempts to store natural gas in the caverns of Seneca Lake.

Felix, a young Mi’kmaq, said, “The water is irreplaceable…Number one thing we need for life, for sustenance. Our job here as Mi’kmaq people is to make sure that this Earth stays green. Protect the sacred. Protect the water. Protect it all for the next seven generations, for everyone to come, in the future.”

The Iroquois Confederacy (Haudenosaunee) was founded by the Great Peacemaker in 1142. The Great Law of Peace (Gayanashagowa) is the oldest living participatory democracy on earth. In 1988, the U.S. Senate paid tribute with a resolution that said, “The confederation of the original 13 colonies into one republic was inﬂuenced by the political system developed by the Iroquois Confederacy, as were many of the democratic principles which were incorporated into the constitution itself.

“The Native American model of governance that is fair and will always meet the needs of the seventh generation to come is taken from the Iroquois Confederacy. The seventh generation principle dictates that decisions that are made today should lead to sustainability for seven generations into the future. And Indigenous nations in North America were and are for the most part organized by democratic principles that focus on the creation of strong kinship bonds that promote leadership in which honor is not earned by material gain but by service to others.”

Alliances with others are based on empathy and the assumption that there is one race and we are all a part of it. Despite our differences, we want the same things for our children.

I don’t need to appropriate the pain of others to feel authentic. There’s enough bedlam in the world without adding to it. I want to provide the space for those who have been denied dignity and opportunity to express their pain. And to exchange resources to heal and grow.

My family grows, sharing struggles and challenges with unconditional love. My grandchildren energize me and wear me out. We play, but living in reality means not always learning in fun ways.

As a nonno, I play many roles: mentor, healer, historian, a loving companion and adventure guide. Sometimes a jester and fool. We build strong bonds that give us a sense of security and belonging.

Last words, a letter to Mother Earth from Thich Nhat Hanh, the Zen Buddhist monk and peace advocate who has recently died at age 95: “But there are times when we have not done so well. There are times when we have not loved you enough; times when we have forgotten your true nature; and times when we have discriminated and treated you as something other than ourself. There have even been times when, through ignorance and unskillfulness, we have underestimated, exploited, wounded, and polluted you. That is why I make the deep vow today, with gratitude and love in my heart, to cherish and protect your beauty, and to embody your wondrous consciousness in my own life. I vow to follow in the footsteps of those who have gone before me, to live with awakening and compassion, and so be worthy of calling myself your child.”

I want to breathe together, sharing the air through poetry, sports, songs, and dance. Solve problems as we repair the past we step into.