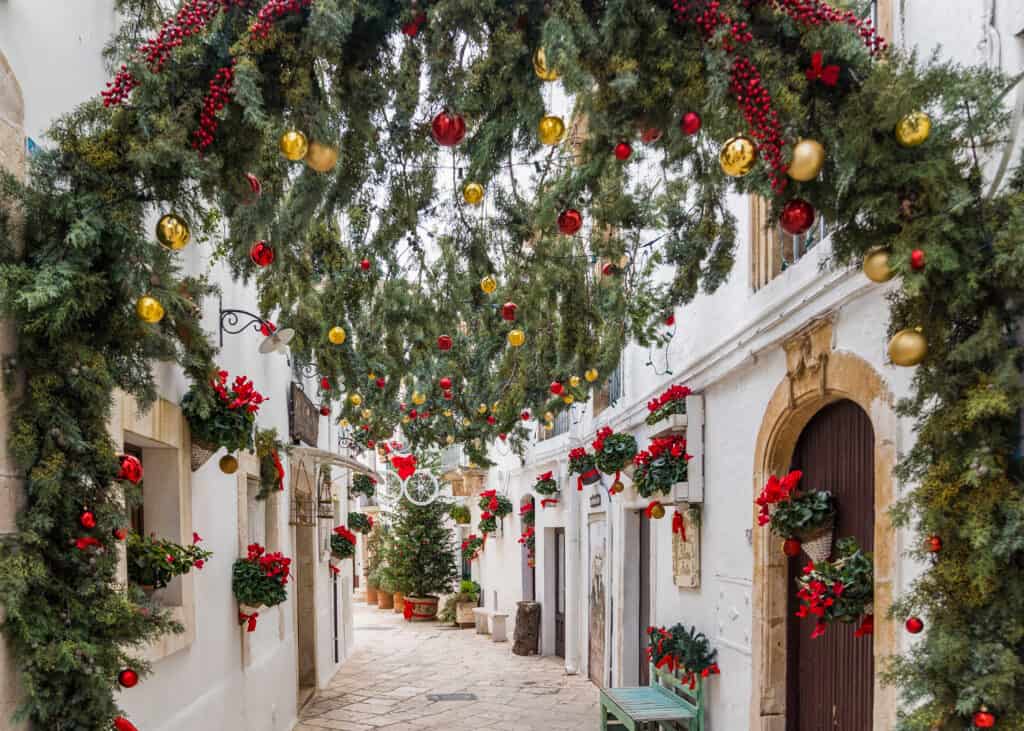 It was the most magical time of the year. The time we used to wait for during all the other months since we were kids, but also as grown ups. I remember the party atmosphere that filled the days before Christmas Eve and that day itself.

So, we used to have dinner at Nonna Marcella’s home for Christmas Eve. She was from Taranto, Puglia, Southern Italy, but she moved to Carrara with my grandpa—who was from Naples—after they got married because he came here to work.

Now, in Carrara, there isn’t a big tradition about Christmas Eve: People usually celebrate Christmas Day at lunch, on the 25th of December, and most families don’t do anything the night before. On the contrary, in the south of Italy much importance is given to the night of the 24th December, maybe even more than to the 25th (or at least this is what my maternal grandparents have always told us).

As long as I can remember, at Christmas Eve at Nonna’s there were a lot of people: my grandparents (even though my grandpa died in 2002 when I was only 6 years old), my parents, my brother and I, my paternal grandparents, my aunt (my mother’s sister) and uncle and their two daughters, my uncle’s parents and his sister with her daughter. There also used to be a couple who were my grandparents’ friends: The woman was also from Naples, and she was a well-known judge in town. My grandparents had a lot of friends here who came from southern Italy. The high number of people contributed to create the happy and festive atmosphere, which we loved.

So, on the 24th, we used to go to Nonna’s house early to help her get everything done: I remember we would eat at the big table in the living room and light up the fireplace. In the same room, we had set up the Christmas tree (rigorously: a real fir tree) and the nativity scene using the valuable little statues bought in Naples, some weeks before. Also, the moment of the preparation of the tree and nativity scene was one of my favourite days of the period: My brother, cousins and I would have lunch at Nonna’s house, usually a day around the 8th of December, and then after lunch we would spend the afternoon setting up the Christmas tree, with all the new and old decorations, and we would laugh at some of them dating back to my Nonna’s childhood because we found them ugly. I remember that once we tried to hide them because we didn’t like them on the tree, but we were rumbled by Nonna and had to put them on anyway. When we were younger, she also used to hang some Santa Claus-shaped chocolate on the tree, so that we could find and eat them. Then, each of us four children had their personal angel-shaped decoration that we used to hang on the tree, wherever we preferred. The rule was that each of us had to hang their one, and if it happened that one of us was not present for the tree set up (which didn’t actually happen very often), then we couldn’t hang their angel; it had to wait for its owner to be hung. We would also put some wooden baskets under the tree to collect all the presents.

Then, we would set up the nativity scene: Nonna cared about it so much more than the tree, and I have to say it was really spectacular, especially because all the little statues had been created in Naples and they were really amazing. All of the statues represented a character of the little village: There was the fishmonger, the pizza maker, the fruit seller, the cheese seller… so we would create a “market zone;” then, my favourite one was that of two old men playing cards on a desk, that we would put by the little lake we would create using aluminum foil. Near the lake, we would also put the shepherd with his herd. Then of course, there was the shed with Mary, Joseph, baby Jesus, and the ox and the donkey. We also had the Three Wise Men, and we would move them closer and closer to the shed day by day, until their arrival on the Epiphany day. Some of the statues were electric and they moved when they were on: for example, the pizza chef moved the pizza in and out of the oven. The Nativity had a rule too: Baby Jesus had to be hidden until midnight of the 24th, because we had to wait for him to be born, so when the clock struck at midnight we would all form a kind of procession starting from the entrance door of the house, and we would proceed to the living room where we had eaten and where the nativity was, and the first person of the row (usually the youngest when we were kids, and then every year we would change person) would put Jesus in his place in the shed. During the procession, we used to sing “Tu scendi dalle stelle” (I think the English name is “From starry skies descending”) and hold a candle each. Only after that moment, when Jesus was born, we could open the presents. Regarding this, some of the adults would bring us children into another room with an excuse, so that the others could fill the baskets with the presents that we would find when we entered the living room again, and we were always told that Santa had just arrived, coming down the chimney, and had left presents for us. The fun thing is that this put-on continued to be performed even when all of us had grown up and none of us believed in the existence of Santa any more, but tradition is tradition, and who are we to put it in discussion?

There was also another thing that I loved about the decorations, which was the candles table. There was this little glass table that my Nonna and I would decorate with some candles. She knew I loved them, so I was the person in charge for this task. She had many beautiful candles, some of them had spicy winter scents, some were just regular candles of different shapes and colours, others had a particular shape instead: There was one shaped like Santa, another shaped like a penguin, then there was a candle who was white but had decorations all around of snowflakes.

Then, also the shelf above the fireplace was decorated with gnome statues and, of course, the wreath out of the entrance door couldn’t miss.

There were a lot of decorations in the room, but this was large enough. We would then prepare the big table and chairs where we would have dinner. We usually used a red and white tablecloth, very christmassy, and other smaller festive decorations that we used as nameplate.

Another hugely important thing about Christmas Eve was, obviously, the food. We used to eat salmon and butter bruschettas for antipasto, and other mixed appetizers that changed every year. Then, as a first course, Nonna would usually prepare “lasagna alla napoletana” when we were younger, because some of us didn’t like fish, and it was prepared with ragù and ricotta cheese instead of bechamel. For the adults, there always was something with fish: could be pasta with prawns, fish ravioli, pasta with salmon… a strong point of this dinner has always been the “insalata di rinforzo (support salad),” which is really good. It’s made with boiled cabbage, green olives from Naples, anchovies, and peppers. It really is a must. E I secondi??? Chiedere. Then, we would always eat some fruit and dried fruit, and then dessert. We would have the typical panettone or pandoro, which we’d buy some days before, but some of us would also always prepare a cake. Usually, my mum and I did it, and it often was tiramisù or mascarpone custard to be eaten with pandoro slices. Sometimes, we prepared “struffoli,” a typical dessert from Southern Italy, made with little pastry balls which had to be fried, and created a sort of pyramid with them, then spread honey all over and decorated with coloured sugar decorations.

After dinner, as I said, we would have to wait for midnight to do the procession and open the presents, so in the meantime, we would chit chat by the fire and play tombola.