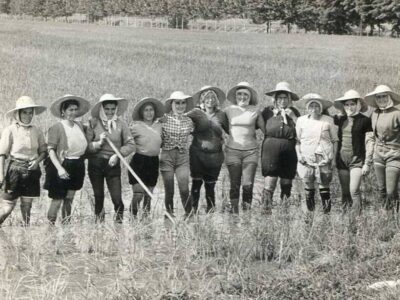 “Bella Ciao” is the kind of song that can be in the soundtrack of a child’s life and they are never even aware of it, yet years later, when they hear it, it has the familiarity of a family recipe or a parent’s voice. The old Italian folk song, which had its origins in the brutal work conditions of the mondine (pictured right) transformed into a song of resistance as Italians fought off the Fascist Party. It later spread worldwide and has become representative of struggles everywhere.

It even found a new life during the worldwide coronavirus pandemic as a ballad of solidarity, a love song to one’s neighbors.

A BIRTH IN THE FIELDS

“Bella Ciao” was originally sung as “Alla mattina appena alzata” by seasonal workers of paddy fields of rice, especially in Italy’s Po Valley from the late 19th century to the first half of the 20th century with different lyrics. The work of monda (weeding) was widespread in northern Italy in that era. The work consisted of removing the weeds growing in rice fields that hindered the healthy growth of young rice plants. It took place during the flooding of the fields, from the end of April to the beginning of June every year, during which the delicate shoots needed to be protected, during the first stages of their development, from temperature differences between the day and the night. It consisted of two phases: transplanting the plants and pruning the weeds. The work of monda was an extremely tiring task, carried out mostly by women known as mondinas (rice-weeders) that came from the poorest social classes. The workers would spend their workdays with their bare feet in water up to their knees and their backs bent for many hours. The atrocious working conditions, long hours and very low pay led to constant dissatisfaction and led, at times to rebellious movements and riots in the early years of the twentieth century. The struggles against the supervising padroni were even harder with the abundance of clandestine workers ready to compromise even further the already low wages just to get work. Besides “Bella ciao”, similar songs by the mondina women included “Sciur padrun da li beli braghi bianchi” and “Se otto ore vi sembran poche”.

Adapted from a FolkWorld article.

The Lives of “Bella Ciao”

Folk singer Giovanna Daffini’s recording of “Bella Ciao” could be considered the most “authentic” because she worked in the rice fields as a child and sang the song as she labored with the women around her.